Tell us a little bit about yourself : Your passions, your hobbies, your projects…

My name is Tony D’Aliesio and live in Montreal Quebec Canada.  I have been married for over 25 years with Anna and have 3 daughters.  Vanessa, Alessia and Milena. I enjoy playing many sports from hockey to scuba diving, but one true passion is traveling.  Traveling has been a great passion of mine and thanks to Delta Air Lines, I have been blessed in traveling the world.  Although a retired Delta employee, I continue to take full advantage of traveling to different areas of the world.

What is your blog about and why did you want to address this subject when starting it?

My blog is a summary of every destination that I have  visited.  Whether it may have been for business or leisure, looking back and reliving the moment through words gives me a sense of time, memory and inner fulfillment.  Although every blog consists of very similar contents, there are distinctive differences between them in which I add my thoughts and personal experience.  I want to leave this book with my children for them to read in the future.  It will paint both a visual and descriptive journey of my passion to travel.

What do you like the most about blogging and traveling?

My passion has been traveling the world to experience different cultures, to witness great natural wonders of the world, and a way to tie in all of history’s events with my physical presence.  From standing where the last supper had taken place on Mount Zion in Jerusalem to walking the eerie grounds of Dachau’s concentration camp in Germany, they all add to my character and give me foresight of what is truly important in this life.

Of all the places you visited, which one is your favorite?

Many locations I have visited are exceptionally beautiful.  From Australia to Dubai, from Brazil to Shanghai; from the riches of Monaco to the dangers of Jordan……all have their own allure.  Europe in general possess the most elaborate architectural perfection while other locations flourish in natural beauty.  If I had to select from several categories, I would say the Amalfi coast in Italy, Prague in the Czech Republic, and the wonderful Pyramids of Egypt.  Again, there are so many other locations with similar beauty and selecting one is completely impossible.

My next destinations are to visit the cliffs of Moher in Dublin, the glaciers in Anchorage and a safari in Africa.

What part of your  adventures blog are you the most proud of?

I am very proud of the entire blog and with the many destinations involving my children, friends and family, it also acts as a memory scrap book that sparks conversation every time it is flipped opened. In my eyes, a truly piece of art!

Why did you want to turn your adventures  blog into a book?

I decided to turn my blog into a book for occasional reading of my past adventures.  When reading the book, it allows me to relive the past and actually feel the excitement as when it actually happened.  The physical book is also a form of legacy or diary that will be left behind for my children to read.  It will basically be a narrative copulation of all my adventures.

How did you find out about BlookUp?

After blogging the journeys online, I researched for a service that would turn online blogs to a physical book.  I came across several companies but after trying BlookUp, I knew it would offer what I was looking for.

What did you think about the making process of your blook? Did you encounter any difficulties or issues?

BlookUp was extremely easy to use.  It offered great menu choices as well as allowing the user flexibility to either fully customize the book or simply use their incorporated templates. All of which assures the end result is exactly to your taste and style.

Do you enjoy the final result? What does your family and friends think about your blook?

The final result is a true representation of what I was seeking.  Clean, concise, and visually pleasing.  My family loves it and will surely remain a piece of history that is nostalgic with more sentimental value as the years pass.  I am currently working on my second book and will surely use BlookUp again.  In fact, I would recommend BlookUp to anyone that would want to convert their online blogs to a physical book. 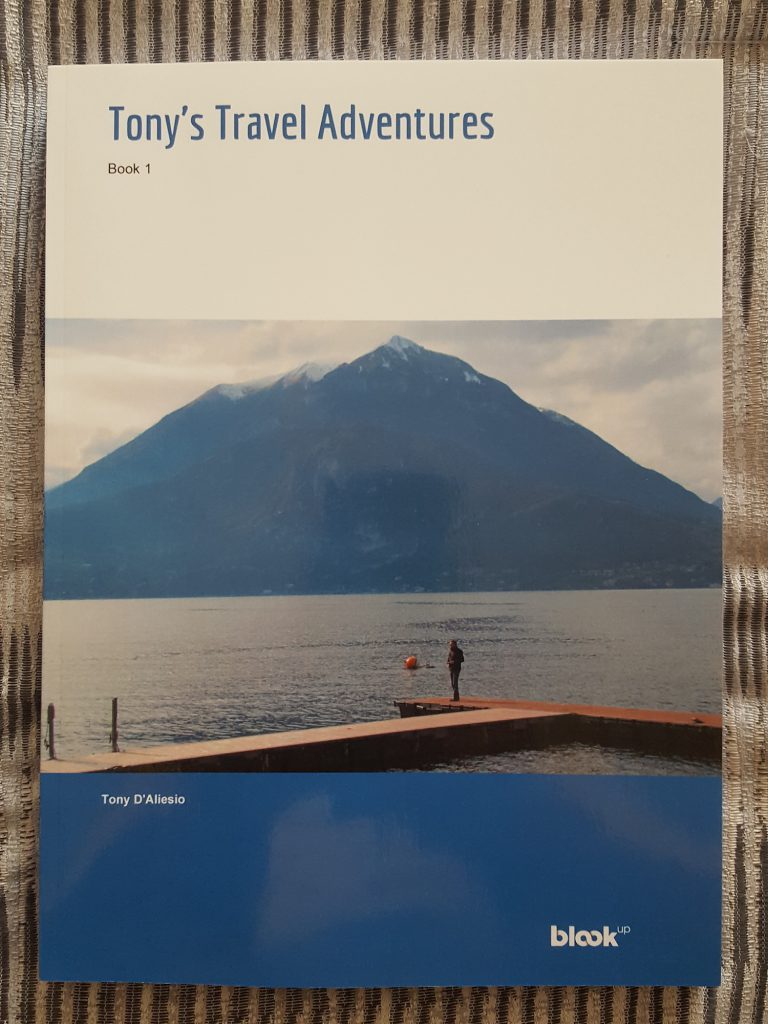 Huge thank you to Tony for answering our questions, impressive list of destinations we have here. If you are looking for places to add to your travel bucket-list then have a look at Tony’s blog!

Here you are!  We were waiting for you, come in, take a seat!

Accurate representation of the BlookUp Team while publishing this article.

It’s been 5 years since BlookUp embarked on the great adventure of printing books out of blogs. 5 years of research and development concentrated on our import tool which is always improving despite technical and time constraints, 5 years of strong relationship with our blookers who share our concept without failing, 5 years of digital contents imported from all over the world and returning to it delivered in the form of real paper books.

The excitement we feel at the sight of all the progress made through all theses years is so strong we can’t name it. All the BlookUp Team can (and wants to) do is thanking you for making us grow, for making every new day and every new feature possible.

In order to thank you for your confidence, it’s happy hour time! Enjoy 25% off your next order with the HAPPYBLOOK promo code, valid until 10/18/2016!

It’s time to wish for a bright and long future!

Last November, we talked about the little book of Evan and his idea to compile all the little pleasures of life. Revisiting this article, a question crossed our minds.

What about the great books? What are they talking about?

Two of them particularly caught our attention, and for one good reason.

Each of them, in their way, can be considered as the greatest books in the world, although not formalized by the Guinness Book. By the way, did you know?

The greatest book formalized by the Institute of World Records was unveiled by the Mshahed International Group in Dubai in 2012, measures 5m x 8.06m and weighs 1500 kg!

With this in mind, we were already very excited to search for more! 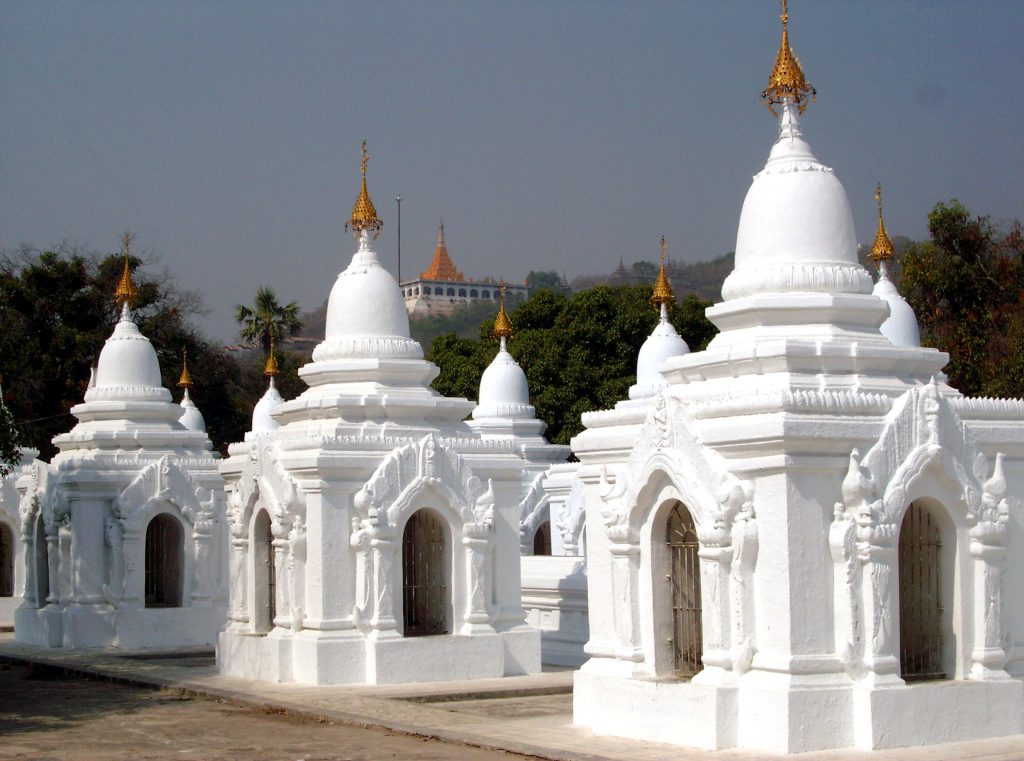 The Tripitaka brings together all the founding texts of the Buddhist religion since the 1st century BC.

Several tons of written surface are spread over nearly 730 headstones entierely made of marble! Protected in their stupas, small carved temples commemorating Buddha, these imposing stones are about 1.5m tall for about 13cm thick and remain accessible to the public today.

You can go admire and browse this book of several volumes (listed in the Memory of the World Register) at the Kuthodaw Pagoda, gigantic temple designed as a monument to the glory of Buddhism, in Burma. 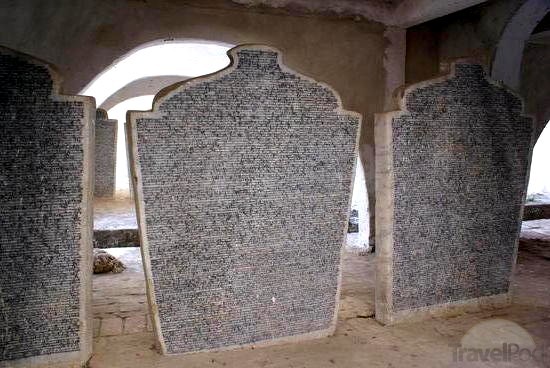 Hours of reading are awaiting… Provided that you can understand Pali! 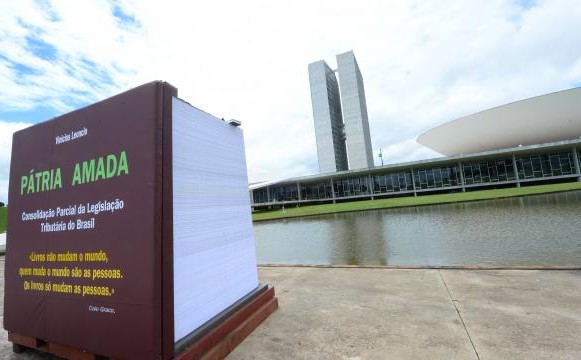 Exposed right in front of the Congress building in Brasilia, the book “Pátria Amada” is, according to its author Vinicius Leoncio, “the biggest book in the world”.

With a height of 2m and weighing almost 7 tons, it would be remiss to contradict him!

The lawyer has collected in this book almost four million tax regulations, for a total of 41,266 pages.

This conscientious author, who affectionately and ironically titled his book “Beloved Nation”, denounces the heaviness of the Brazilian tax system where, according to him, “a company passes on average 2,600 hours a year to solve its bureaucracy, against 180 hours of Europe […] in Brazil, we create around 35 tax rules by day. “

The story does not say if the Brazilian parliamentarians began to dissect this very complete book, but if simplified tax reforms begin to take shape soon, we can suspect that it would have contributed to their creation.

The next person to make an impression in the world of books may be you!

So if these examples inspired you, you can get started! BlookUp certainly does not propose the Obelisk format yet , but 500 pages make a pretty good start for GREATER projects …